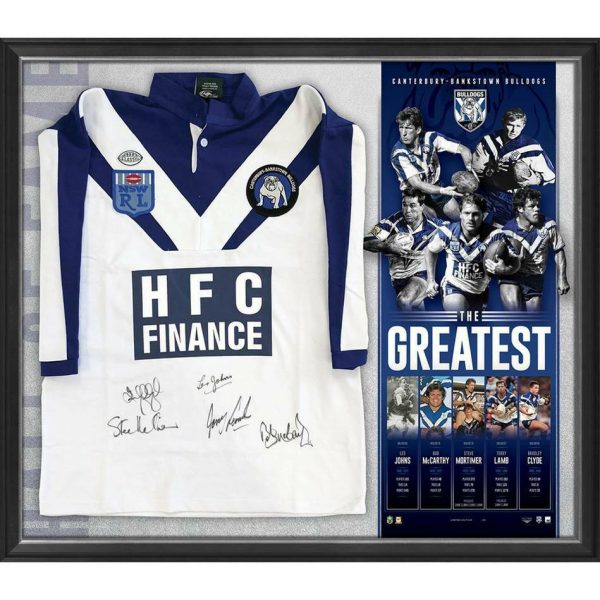 Canterbury-Bankstown ‘The Greatest’ Jersey. Featuring an official heritage jersey personally signed by the club’s greatest players — names synonymous with individual brilliance and team triumph — Canterbury-Bankstown ‘The Greatest’ Jersey is strictly limited to just 50 editions worldwide. Officially licensed and endorsed by the NRL, secure yours now to avoid missing out on your piece of Broncos history.

Pays tribute to five legends who have represented the Bulldogs with distinction during nine decades of greatness
Features a 1995 heritage Bulldogs jersey personally signed by the Club’s five living NRL Hall of Fame inductees — Bradley Clyde, Les Johns, Terry Lamb, Bob McCarthy, and Steve Mortimer
Stunning display features action imagery of all five stars, as well as achievements and key statistics from their respective Bulldogs careers
Limited to just 50 editions worldwide, with each edition accompanied by an individually numbered RLPA-endorsed Certificate of Authenticity
Officially licensed and endorsed by the National Rugby League
Independently authenticated by a-Tag, with each edition including a tamper-proof, uniquely numbered hologram discreetly affixed to the display
Approximate framed dimensions are an impressive 1000 x 790 mm